Home / Health / My Thoughts on Medications & Living a Healthy Lifestyle

I’m often asked if I take medications for my Crohn’s Disease, and if not, how I stay in remission without them, so today I’m talking all about my thoughts on medications and the role that they play in a healthy lifestyle! 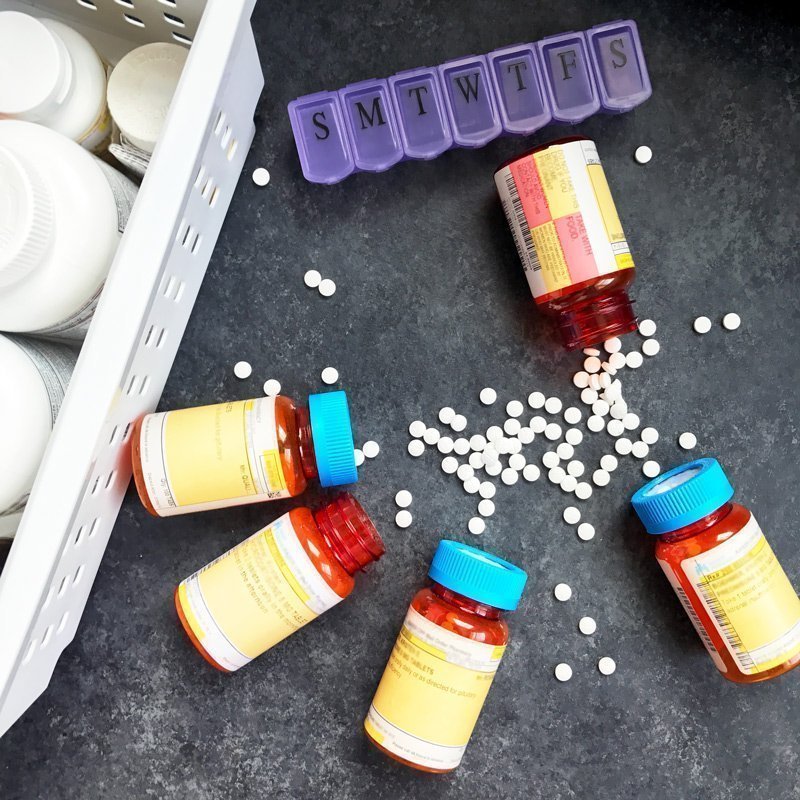 The short answer is that I no longer take any medications.

It’s crazy to even type that out, as my life used to completely revolve around pills, shots and infusions, as without them, my Crohn’s would flare uncontrollably.

I was on medications for 19 years straight – from the time that I was first diagnosed with Crohn’s at 12 years old. I’ve always had a severe case of Crohn’s, and I wasn’t someone who was able to stay in remission without medications. For the last 5 ½ of the 19 years that I was on medications, I was only on Prednisone, which was for Adrenal Insufficiency, not Crohn’s Disease.

I stopped taking all medications for my Crohn’s Disease a week before my surgery in February 2011, as my surgeon instructed me to. I was labeled as a high-risk patient going into surgery, as my immune system was incredibly weak, so taking me off the medications prior to surgery was an extra precaution.

Shortly after my surgery my doctor wanted me to start taking my Crohn’s medications again. At this point, I understood just how weak my body was and that it was no longer able to tolerate the medications, so I refused to start taking them again.

For me, medications are about the delicate balance of the risk vs. benefit.

Sometimes the benefit of taking a medication far outweighs the risk, and sometimes, it’s the complete opposite. That’s up to YOU to decide.

For the first 9 years since I was diagnosed with Crohn’s Disease, I definitely experienced side effects from the medications that I was on, but the majority of them were short term, and didn’t last. It wasn’t until I was 21 that the medications I was on began to have serious consequences, which ultimately led to fungal growth spots in my lungs, infections in my blood, and finally because they had stopped working like they did for me in the past, the removal of my entire large intestine (over 6 feet).

By the time that I needed to have my entire large intestine removed, the medications that I was on were doing much more harm than good, and they were no longer keeping me in remission.

Up until 4 years ago I’d been sick for so long that I didn’t actually realize what was normal and what wasn’t when it came to being healthy. It wasn’t until February 2013, when I drastically changed my diet and lifestyle that I realized my Crohn’s wasn’t in remission before that. Up until that point, I was dealing with painful obstructions at least once to twice a month. My doctors told me that this was normal, and I believed them, thinking that it must be caused by not having a large intestine.

Changing my diet and lifestyle helped me to realize that those experiences were anything but normal.

Changing the food that I was eating and learning to create a positive mindset changed my life more than I can even put into words. The longer I’ve stuck with this lifestyle, the healthier and stronger I’ve become.

There isn’t a single moment in my life that I can remember feeling as healthy and strong as I am today.

I stuck with following a strict paleo diet for approximately 2 years, cutting out all gluten, grains, dairy, legumes, and sticking to meat, vegetables, fruit, nuts and seeds. This is the time that it took MY body to fully heal from all that it went through. During this time I really focused on improving my gut health, which for the first time in my entire life, I finally understood the true importance of. Gut health is EVERYTHING.

I no longer take any medications, and I’m so grateful for ability to stay in remission without them.

My lifestyle is what makes this possible for ME, but we’re all different, and I believe that it’s about finding what works best for YOU.

Just as I’m forever grateful to my doctors for saving my life, I’m also incredibly grateful for the medications that I was on, because they saved my life over and over again as well.

Learning to have gratitude for the things that I once believed caused me the most pain is a HUGE part of why I’m so healthy today. The life that I’ve now created is about SO much more than just what I eat.

I have no doubt that I wouldn’t be here today without the medications that I was once on. They’re now simply a part of my story, and while at times it felt like they’d broken me down, in the end; they made only made me so much stronger.

So often I hear from readers wanting to get off of their medications. While I completely understand where they’re coming from – I want to make one thing really clear.

Whether you decide to take medications or not is completely up to YOU. There is no right or wrong way to do any of this, there is only the way that works for YOU.

We’re all on our own unique journey, and some of us need medications, and some of us don’t. Sometimes changing your diet and lifestyle is the complete answer, and sometimes it’s just part of it.

While you may not always have a choice in the circumstances in your life, you ALWAYS have a choice as to how you respond. I believe that beating yourself up or feeling guilty about anything is a complete waste of energy.

My Thoughts on Medications & Living a Healthy Lifestyle

Toss out the bland and boring food and take your meals to the next level! Sign up to get my eBook with 33 insanely delicious recipes.