When I was a little girl, my dad taught me that strong is beautiful, and that skinny wasn’t something to focus on. My mom also played a huge role in how I saw myself as a child, but it was something about my dad’s words that stuck with me throughout my life. When I was very underweight and sick with Crohn’s Disease, my dad would make me protein shakes, in hopes of me gaining some weight. Learning to love your body can seem like a real struggle, but I know that if I can do it, so can you. 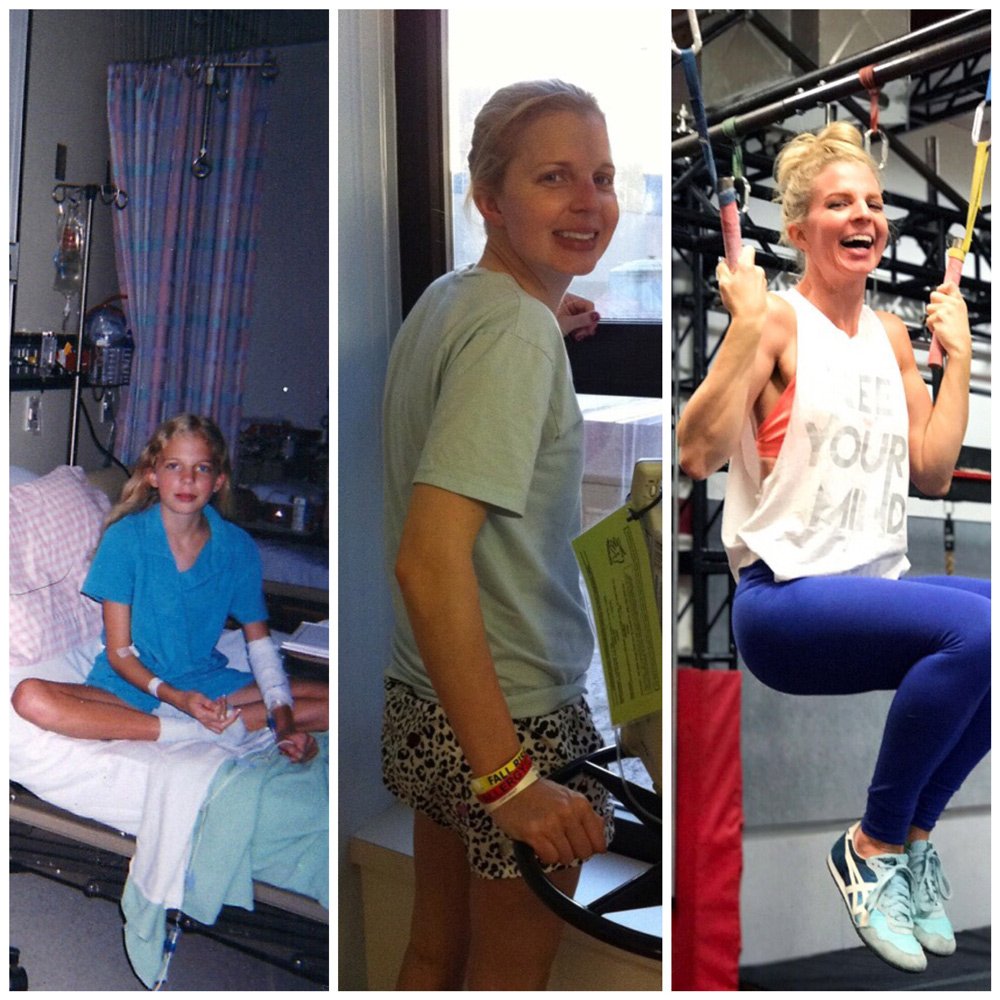 In our society we’re constantly bombarded with television, magazines and the Internet, telling us who we should be and how we should look. Many of us realize that nearly every magazine cover is photoshopped, and yet we still compare ourselves to a fake reality. I know I certainly did this for YEARS.

Learning to love your body is challenging enough in this world, and when you add in a chronic illness and medications that change the way you look – it can feel next to impossible. 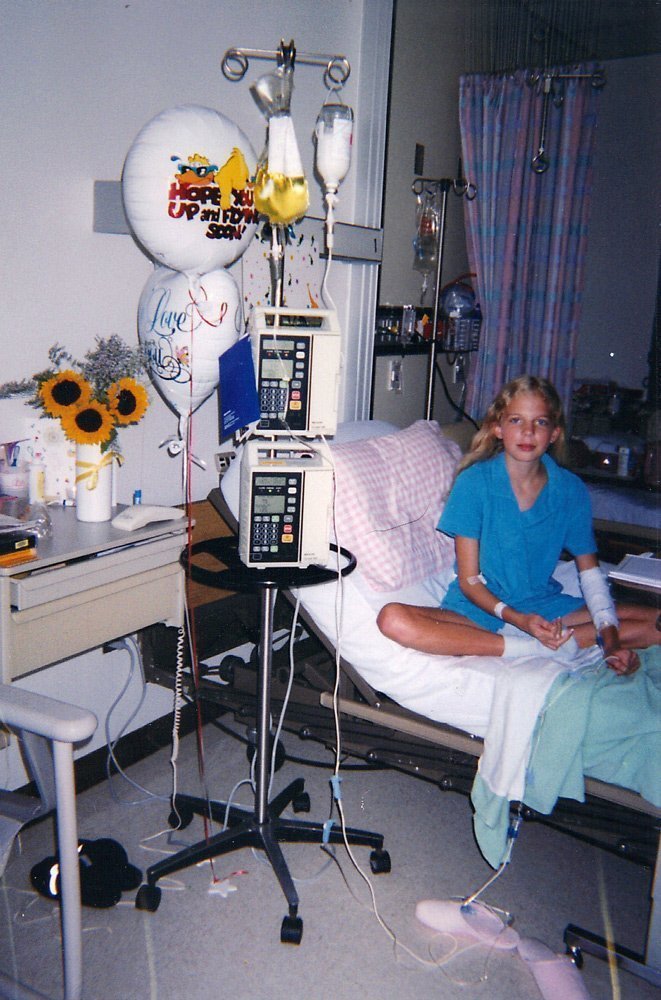 In the hospital shortly after being diagnosed with Crohn’s Disease, at 12 years old and 60 lbs.

At the age of 12 I suddenly became very sick, and shortly after, I was diagnosed with Crohn’s Disease. On May 23, 1997, I was given the first of many medications to control my Crohn’s. This medication was Prednisone, and it flipped my world as I knew it upside down.

Of the MANY side effects I experienced due to Prednisone, the “” as they call it, was one of the most challenging that I dealt with. This caused my face to become very round, and because of it, it felt as if I wore my disease. Middle school is a challenge in itself, and looking so different from everyone else really challenged my self-confidence. 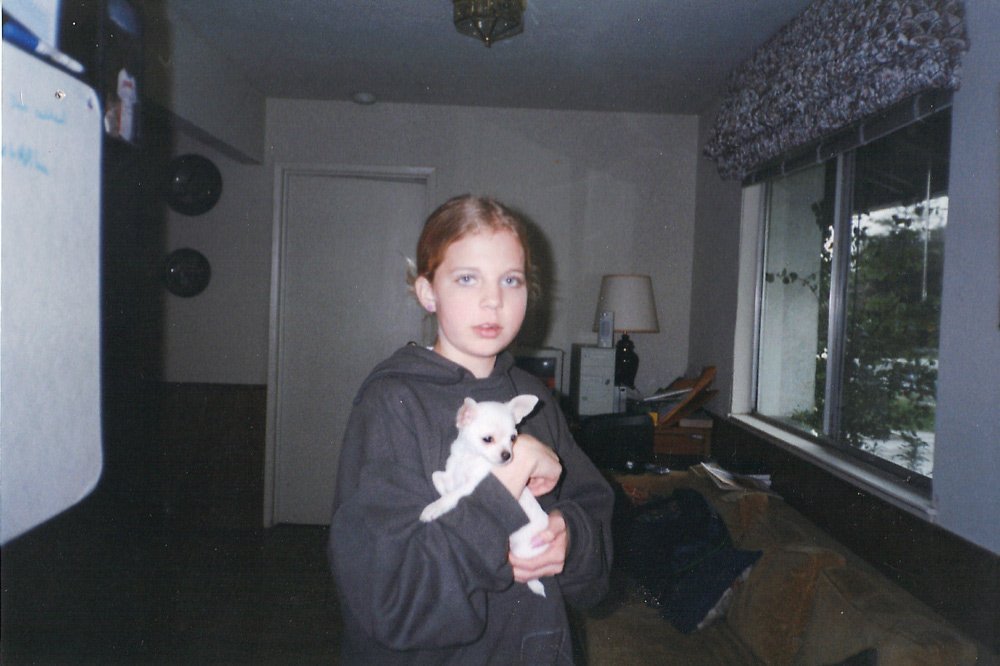 I went into my freshman year of high school with puffy cheeks, but shortly after, I was placed on a medication that worked wonders, and with very few side effects. Throughout my high school years I never talked about my Crohn’s, and hardly anyone knew that I had it. I kept it hidden, as the last thing I wanted was to be was different.

A year after finishing high school, and 6 months after meeting my now husband (Mike), the medication I’d been on for the previous 4 years suddenly stopped working. My disease came back in full force, and I was once again placed on Prednisone. Here’s the thing though, Mike always told me I was beautiful. He loved me no matter what, even when I didn’t feel worthy of love.

Fast forward to 2010, when my life began to take a dramatic shift. In addition to the constant sinus infections that I had, I also developed fungus in my lungs due to the medication that I was taking to control my Crohn’s Disease. I was immediately taken off of that medication and placed onto another that I had taken when I was 14 years old, as it was my only option at the time.

As I’ve experienced many times in the past, I once again became terrified to eat, as anything I did eat went right through me and caused intense pain in my gut. I’d lost a ton of weight and was barely touching 100 lbs, which is extremely underweight for me. Mike and I had made plans to go to Vegas with our friends, and we decided to still go. I remember being in my bathing suit, completely embarrassed about the 6” scar on my abdomen. It made me different, and that was the last thing I wanted to be.

I was so sick and completely miserable, yet I was getting more compliments than I had ever received. I had women coming up to me that I’d never even met, constantly telling me how great I looked.

I was so malnourished, incredibly insecure, and yet so many people were praising me.

THIS is so much of what is backwards in our society. 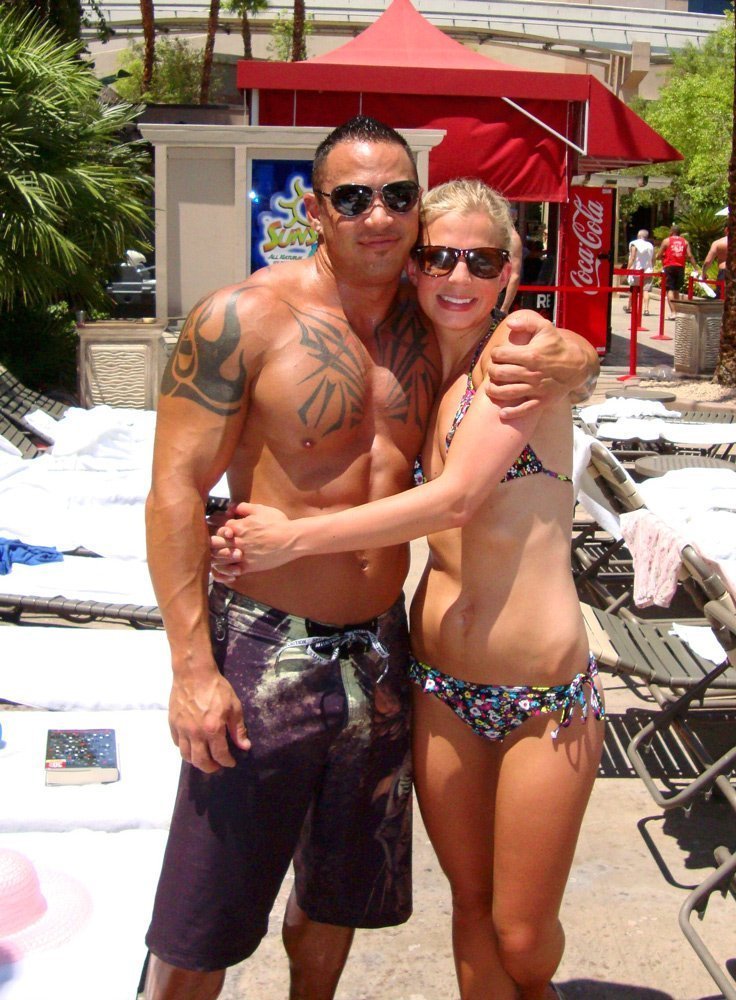 Vegas, June 2010. You’d never know it, but I was MISERABLE in this picture, and barely touching 100 lbs.

The “older” medication that I was put on no longer worked for me, and once again, I was placed back on Prednisone. Once again, my cheeks puffed up, and I looked very different in just a short amount of time. 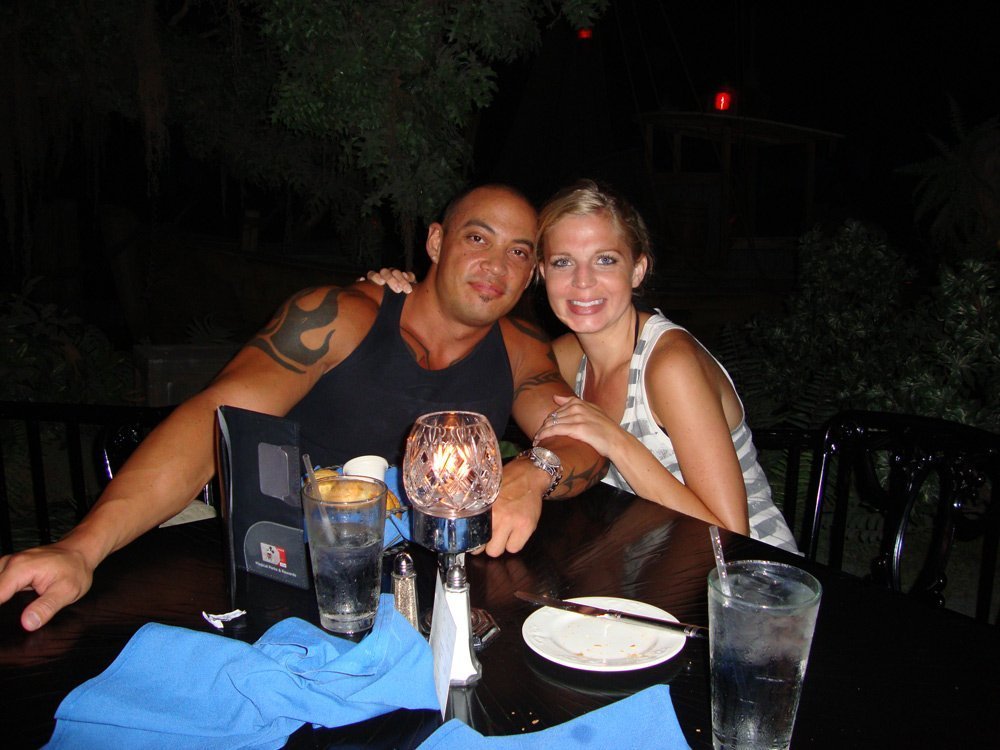 August 2010 with my Prednisone cheeks 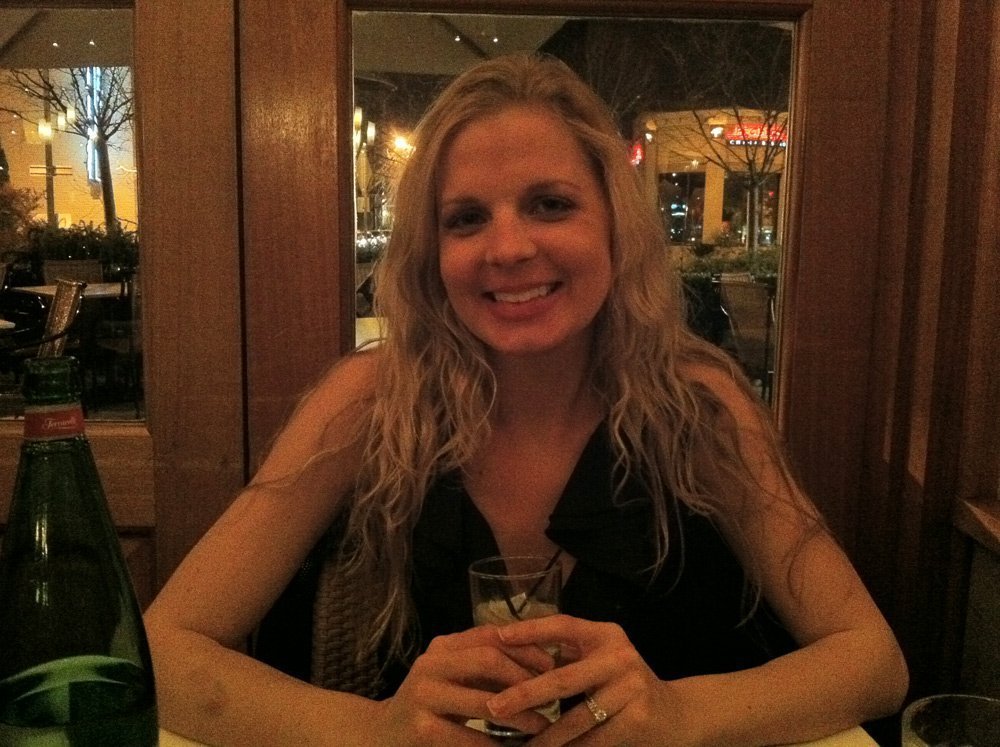 December 2010, a couple days after I got out of the hospital – note the sweet IV bruises on my right arm 😉

My self-confidence was a complete mess, and it was only about to get worse. On February 4th 2011, I had a life-saving and life-changing surgery to remove over 6 feet of diseased intestine. I was given an ileostomy, which once again, changed how I looked. The months following this surgery were the darkest that I have ever experienced. I lived with so much regret, knowing that this surgery was my only real option at the time. I hated my body and I felt as if it had betrayed me. 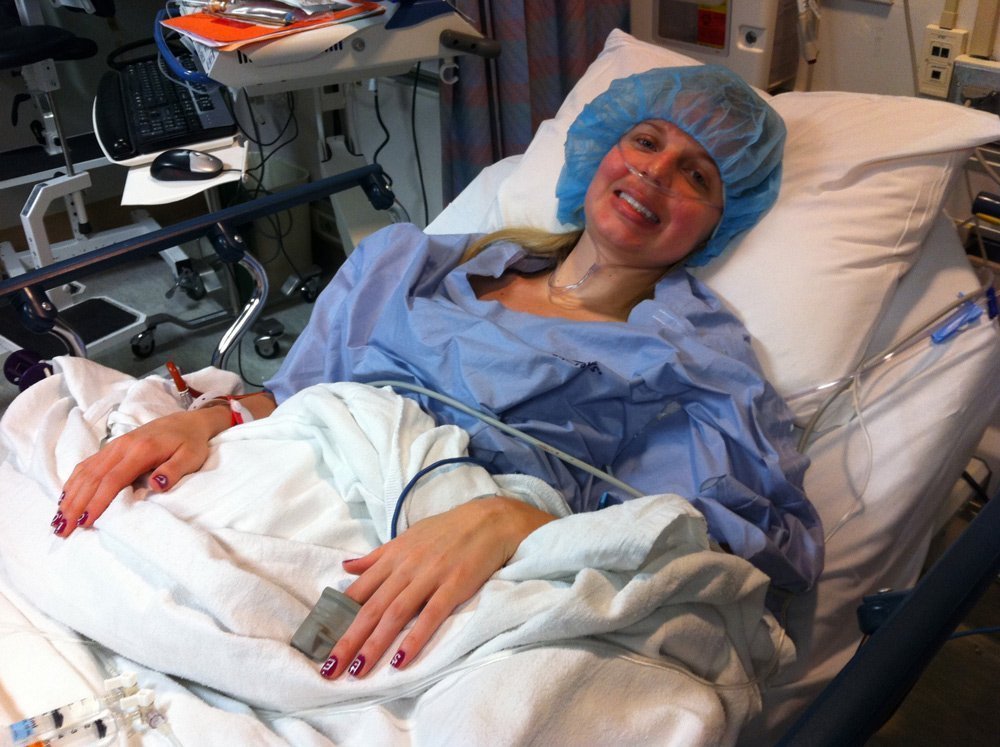 February 4th, 2011 – right before I was taken into surgery

I remember shortly after my surgery, I was desperately looking for hope from others who have had similar experiences, and I came across an online chat forum. In this group, multiple people were talking about wanting to end their life, simply because they had an ostomy. That was a life-changing moment for me. I realized that it was only a big deal because they were making it a big deal. This was the very beginning of my long road to self-acceptance. I came to the realization that if someone doesn’t accept me because I have an ostomy, that’s their problem, not mine. 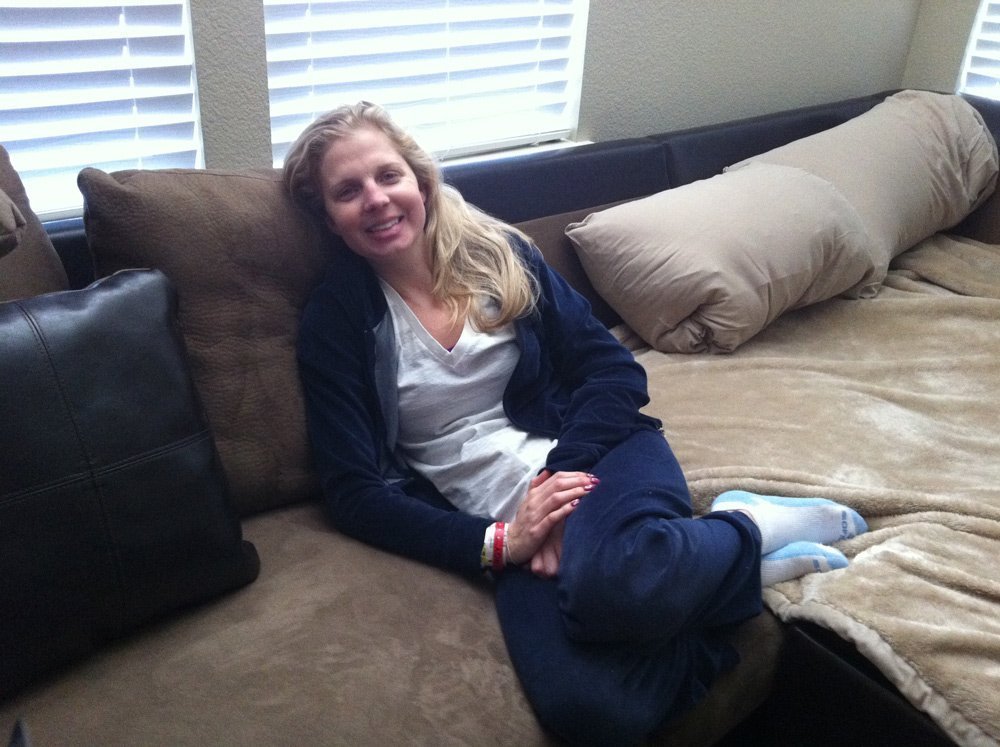 February 12, 2011 – the day I arrived home from the hospital after my surgery

Two months after my surgery, I developed Adrenal Insufficiency, caused by taking Prednisone. It’s no coincidence that I developed this condition from Prednisone, which caused me to need to take it daily, for over 5 years. 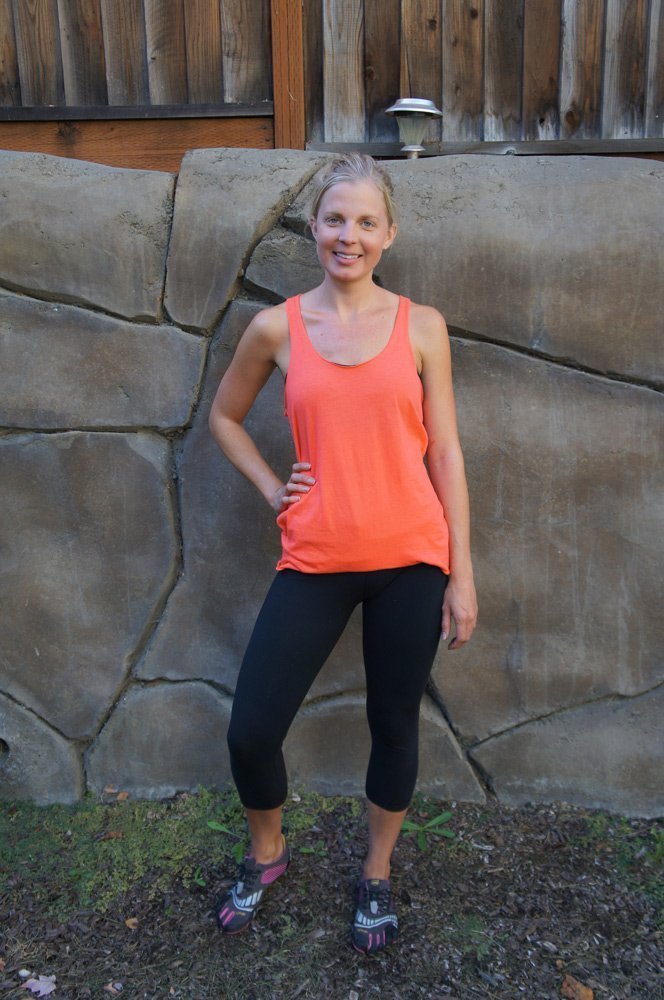 February 2013, 2 years on Prednisone, after my diagnosis of Adrenal Insufficiency

Years into my diagnosis with Adrenal Insufficiency, I read a book called The Loving Diet, written by my friend, Jessica Flanigan of AIP Lifestyle. While reading this book, something clicked. I realized that for the years that I’d taken Prednisone, I was sending that little pill so much hate without even realizing it. I hated the way it made me look and the way that it made me feel.

Once I realized what I was doing, I decided to make a change. From that moment forward, each time I took Prednisone, I sent a silent message of love for all the good that pill did for me. Without it, I wouldn’t be alive today. In order to heal my body and heal my adrenals, I had to make peace with this medication, which I once fiercely hated. This alone changed my life more than I can even put into words.

I began to focus less and less on how Prednisone made me look, and more on how it was keeping me alive. As I healed my relationship with Prednisone, everything began to fall into place, and that’s when I was finally able to fully heal my adrenals.

Learning to love my body for exactly what it is has been a process, but I realize that it’s a choice that I get to make. I’ve realized that having an ostomy has only made me stronger, and it’s only a tiny part of who I am. What once was a HUGE deal, simply isn’t anymore.

I see the beauty in what once made me feel so different, and this has made an incredible impact on my life.

I simply became tired of putting my energy and focus onto my ostomy. It is what it is, and I no longer let it hold me back from anything.

Each day isn’t perfect, and I still struggle with body image issues at times. It’s a constant learning process, but the more I practice it, the easier and easier it becomes.

What’s made the biggest impact for me is focusing on what my body is capable of, not how it looks.

My husband and I call our bodies our “meat suit,” as we are SO MUCH MORE than how we look. To me, true beauty comes from the inside.

Our bodies have to do SO MANY things, just to keep us alive, right in this moment. That in itself is a miracle. You being here today and having the ability to read this is a miracle.

Imagine if we all were exactly the same. How BORING would that be?

For what I once used to look at as my flaws and scars, I now look at as my strengths. Every scar and every challenge that I’ve faced has played a role in creating who I am today.

I’m now by far the strongest and healthiest that I have ever been. It’s been one hell of a journey, and it’s my hope that by me showing you that if I can totally accept myself just as I am, scars, ostomy and all, you can too. 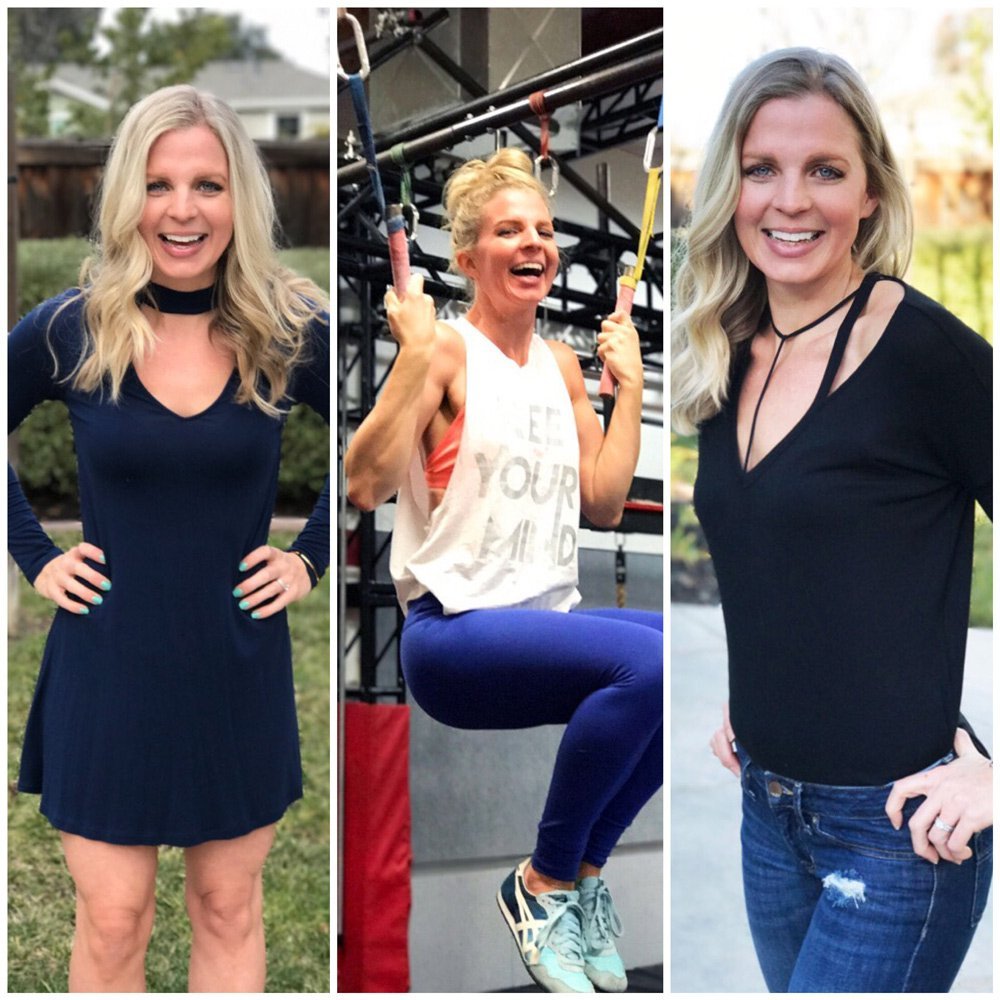 All pictures that were taken this year – healthier and stronger than I’ve ever been!

Learning to Love Your Body

Disclaimer: This post contains affiliate links, meaning that if you purchase something from one of my links, I will receive a small percentage, at no additional cost to you. I will only ever recommend products that I truly believe in, and that I use myself or find to be very valuable. Thanks for helping me to keep my blog up and running!